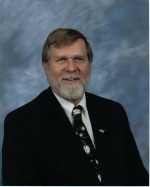 Pastor Sam Stanton, who has served in Nevada since 1989, has served First Southern Baptist Church of Fallon since March, 1996. A graduate of Fruitland Baptist Bible Institute in North Carolina, Midwestern Baptist Theological Seminary in Kansas City, and Covington Theological Seminary in Georgia, Sam had served in North Carolina, Florida, Alabama, and Arkansas before coming to Nevada.

Sam had begun a career in the U. S. Air Force, but felt God’s call into the ministry during his third enlistment. He and Clara and their two children made the transition from military to ministry in 1976. “The nomadic lifestyle we had already known made adapting to ministry a bit easier,” Sam noted.

The children, now grown with families of their own, are both active in their local churches, Sam Jr. in Pennsylvania, and Geri Ann in Arizona.

A Note From Sam:

“First Southern Baptist Church has long enjoyed a reputation as a warm, friendly church that stands firm on biblical truth. Our purpose statement is to, ‘Show our love for God and for each other in all that we do,” and we try to apply that purpose consistently.’

Our desire here at FSBC is to make a difference for the kingdom of God in the community in which He has set us. I am honored to have the privilege of serving in such a church.

I hope that those who are considering a move to Fallon will also consider visiting with us. Whether you are Navy or civilian, there is a place to worship, fellowship and serve with the FSBC family.”